My parents back in Philly were freaking out.  I talked to my mom for the first time in three weeks today.  It was very traumatic.  But it’s over and my prayers were answered.  All I kept asking God for was to be able to see my parents again. . .U.S.-born soldier serving in Gaza since the start of Israel’s Operation Cast Lead

Mom, you’re the best most wonderful mom in the whole world.  I’d give you a shekel just to prove it but I don’t want to waste the money. . .My 7-year-old son

What happened to the good old days when you could kill people and dispose of the bodies in a field and nobody had to know anything?  Now you have to fill out paperwork, file reports and account for every single dead person!  God!  . . .Anonymous person in Tel Aviv cafe

We heard some stories in Gaza about miracles that made me think: The messiah is here.  It’s time.  It’s finally time.  The messiah has come. . .Israeli soldier at Gaza military base

“My daughters, they killed them, Oh Lord. God, God, God.”. . .Gaza physician, Dr. Izeldeen Abuelaish sobbing during a phone interview following the deaths of his three daughters and a niece after an Israeli army shell penetrated the wall of their home.

“I think this broadcast will change public opinion in Israel. . .It feels to me as if some of our audience is seeing and hearing about the high price ordinary Palestinians are paying in this conflict for the first time.”. . . Israeli television journalist Alon Ben David in an interview with the BBC after airing Dr. Izeldeen Abuelaish’s anguished phone call. 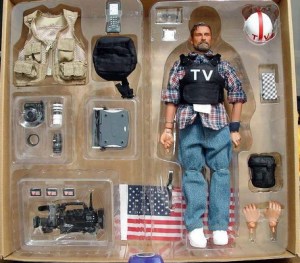 In my most recent post I wrote about returning to work in the television news industry during the current Gaza conflict.

The war itself, the toll to both sides, the ongoing strife,  the shite suffered by children being robbed of their childhoods – and lives – sucks.

Getting back into the industry and my roots, however,  has been a good experience.  And I’m almost ashamed to admit that because  it’s probably not okay to like what I do.  I love what I do, in fact.  But it comes with a price:  internal conflict hard stories evoke between the humane and professional parts of myself.

What I mean is that in the weird world of the press, journalists are often privy to information and images that dub us lucky in the eyes of those outside the business.  We get to see pictures we don’t put out.  Often because they’re too gruesome. We get information before everyone else and sometimes we have to sit on news until it clears censorship – or a next of kin is informed of a death.  That’s not lucky.

But in some cases – like when meeting and interviewing John Lasseter, or gawking Darth Vader‘s original  light sabre and then lunching with colleagues at “The Ranch”– we truly are privileged.

When the images are hard core, the story is war and the information you’re getting ahead of the games is, say, the knowledge that a friend’s son has been killed in a firefight and the friend is phoning to find out if you know anything, it’s tough.  But really tough.

I personally go into rote mode.  I do my job, cover what I need to cover and keep my opinions and feelings in check.  But they occasionally go splashing overboard after returning home and processing what I’ve been doing and seeing.

As I get back into the rhythm of cover, I’m discovering industry changes.  Modern day journo’s multi-task to meet print, radio and television story demands or work desk, field and camera positions.  No pigeon-holing.  They work long hours under not-always-pleasant conditions aided by technical changes that have come to the fore with the advent of digital technology: open fiber optic links, camera to computer broadcast-quality image transfer, not just for techies  easy-to-operate live studios and radio booths.

And gone are the days of cowboy  “Just find the Rebel Forces and go in With Them!” heroics. As insurance rates soar and the face of war moves to urban centers, field producers, crews and correspondents undergo hostile environment training before heading to the field and networks employ security experts:  former special task force or elite ex-military personnel who scout conflict locales for safety and potential danger before allowing journos to go in.

Last night one of the correspondents admitted: “I feel really guilty.  I went back to the hotel at midnight yesterday and slept 6 hours.”

Until that point, she’d been averaging 18-21-hour days on this story.